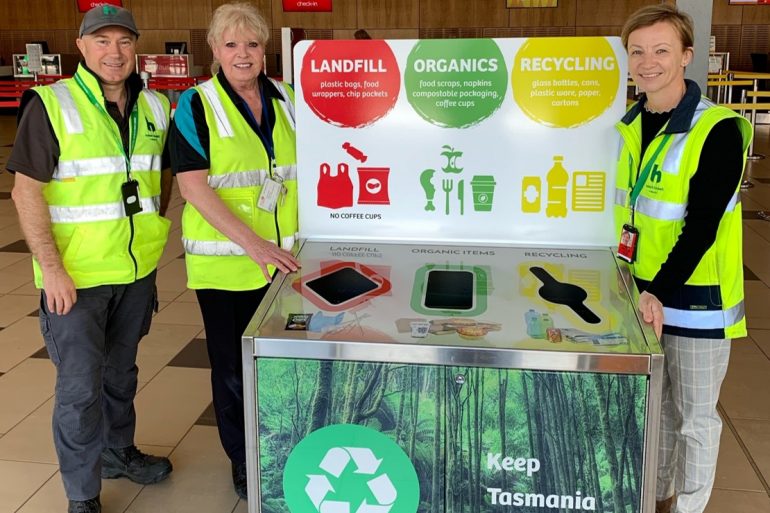 Operating in a state known for its natural beauty comes with environmental obligations and Hobart Airport is living up to that expectation, implementing a new system that has already seen a 20 per cent reduction in the amount of waste heading to landfill.

With an ambitious goal of achieving a 25 per cent reduction in waste diverted to landfill by 2025, the airport identified a three-stream waste segregation system and a move to compostable packaging in its terminal as the best approach.

“There was a lot of research that went on behind the scenes,” Hobart Airport Environment Manager Kirsten Leggett says.

“It’s notoriously difficult to segregate waste in airports because you have such a huge transient population moving through the terminal, all with various levels of education around recycling and segregating waste.

“We spent about eight months researching the best approach and the requirements in setting up our partnership with our composting facility and other stakeholders.

“There was also the educational component — working with our food and beverage stakeholders and cleaning staff — to prepare everyone for the change and to make the transition as seamless as possible.”

Leggett says research included desktop analysis, as well as visits to and discussions with other airports, to gain insights as to what aspects of waste segregation did and didn’t work.

Having developed a waste management strategy in close consultation with their stakeholders, a pilot program on the three-stream waste segregation initiative was introduced in the departures lounge in May 2019.

Within the first month, statistics indicated a diversion of approximately 10 per cent of general waste from landfill. Hobart Airport has now extended the initiative into arrivals and have added extra bins in departures.

“We’ve also brought the food and beverage outlets along on our waste management journey, which saw our diversion increase to 20 per cent of our waste from landfill, which is an amazing result,” Leggett says.

The recyclable waste is collected from Hobart Airport’s waste collection facility and the organics waste, including the compostable packaging, is transferred to Hobart City Council’s composting facility.

“We’re very careful about compostable packaging to make sure that it aligns with what the facility can actually take,” Leggett says, noting that packaging used with food and beverages such as trays and coffee cups are now compostable and join food scraps in the organics bin.

“We had to ensure the composting facility could accept the compostable packaging brands before we could roll that out in outlets in our terminal.”

Changing people’s behaviour was also key and the airport used a number of avenues, including social media and their website, to get the message out.

There is also additional messaging on the bin units, and food and beverage operators were encouraged to spread the word as customers made purchases.

The messaging is designed to reduce the level of uncertainty among people, and Leggett says it appears to work; the vast majority of the compostable packaging ends up in the correct stream.

The colour-coding, diagrams on top of the bins and differing shapes on the bin top-plate also help.

“We have an opportunity to educate passengers travelling in and out of our state to make waste conscious decisions and we hope to see this make a difference in their behaviour beyond our terminal,” Leggett says. “It’s wonderful to watch people actually stop at the bin when there is a choice, rather than see all waste go to landfill.”

Cleaning staff help by checking and taking out items in the wrong bins but they’re finding the rate of segregation is quite good.

The bags in the bins are also colour coded to assist cleaners in segregating waste at the collection point.

“The colour coding is consistent all the way through from the customer, through to the cleaning, and to the depositing of the waste at the collection centre,” Leggett says.

The airport now has 16 bins throughout the terminal, an increase of 10 following the pilot program, and plan to extend it to other parts of the airport.

“We’ve had tenants express interest in having a similar system behind the scenes, so we intend to extend a similar approach to back-of-house areas,” Leggett says.

“In addition, as we progress with new developments, particularly around our forecourt area, we’ll also have increased segregation external to the terminal that will accommodate two streams, co-mingled and general waste.

“While we haven’t yet reached our goal of 25 per cent waste diversion, we are well on track to exceeding that figure in the near future.”

Other projects aimed at reducing the airport’s carbon footprint include transitioning to LED lighting, water-sensitive design as well as the use of water harvesting and energy efficient initiatives in new developments.

The airport also put a considerable effort into the management of wildlife populations, including Tasmanian threatened species, around the precinct.

“There are many initiatives implemented here at Hobart Airport and we are continually striving to reduce our environmental footprint to preserve our airport for future generations,” Leggett says. 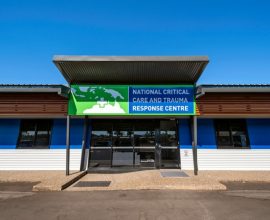 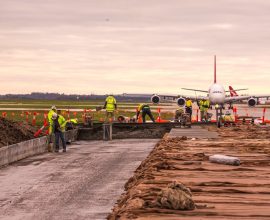